Showing posts from September, 2012
Show All

Which 5GHz Channels Does My Device Support? 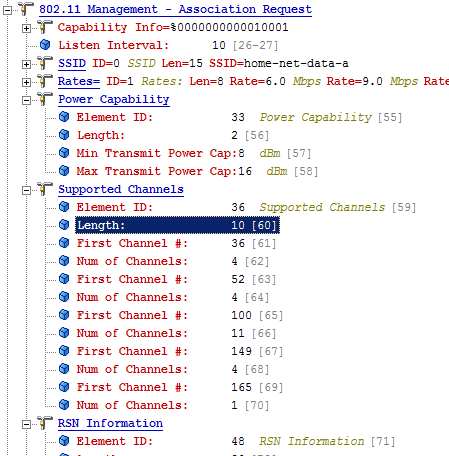 I've been on a bit of a 5GHz quest recently, trying to get to grips with all of the nuances of supporting WiFi devices on this rather (in my mind) troubling band. Until fairly recently, it seems that the default band of choice for many WiFi devices has been 2.4GHz (802.11g/n). But as the whole 'bring your own device' area has exploded, networks require more high-density deployments, 802.11ac is on the horizon and consumer grade devices are starting to support 5GHz in increasing numbers, it looks like 5GHz is going to transition to being the band of choice over the next year or two. However, there seem to be a number of considerations that need to be taken in to account when delving in to the 5GHz 'wonderland'. There are far more non-overlapping channels available (19 in the UK) compared to 2.4GHz (generally 3 channels), which is going to potentially deliver much better performance gains (with the mitigation of co-channel interference, lower noise floor etc.). Ho
Read more

WiFi Channels On The 5GHz Band In The UK

- September 23, 2012
( Note : This information has been superseded (and is out of date!) I now have a whitepaper on this topic you should use instead: link ) One of the issues of not being in the 'good ole U S of A' is that most of the study and reference literature that is available around WiFi is USA-centric. This means that when you are trying to get your head around the various spectrum restrictions that apply to the unlicensed 5GHz band that is used by 802.11a/n, there is little off-the-shelf material that applies to regulatory domains  outside of the USA. Most material that can be found online tends to advise the reader to check the restrictions of their own regulatory domain and any local country restrictions that apply. This is actually a bit trickier than it sounds (in my experience). I'm based in the UK and recently decide to embark on a quest to find the actual source regulations that apply to the use of the 5Ghz band by (unlicensed) WiFi equipment. Although they are a lit
Read more

Installing a PFX File on a Cisco WLC

- September 18, 2012
Cisco provide an excellent guide on how to create a CSR for a wireless LAN controller so that a certificate signed by a public CA can be installed. This is often very useful if you are using the WLC as a guest controller and want to prevent browser security messages that pop-up in a guest’s browser each time they access your guest wireless network. The Cisco guide can be found here: http://www.cisco.com/en/US/customer/products/ps6366/products_configuration_example09186a0080a77592.shtml It also details how to install the chained certificate (provided by a public CA) on to the WLC. The certificate in the examples shown in the document use a ‘.pem’’ (Privacy Enhanced Mail) format file. The method described in the (Cisco) document involves generating a CSR using Open SSL version 0.9.8 to create a certificate request which is then submitted to a public CA such as Thawte, Verisign etc. It should be  possible to generate CSRs using other methods (other than Open SSL), but you may not end up w
Read more
More posts