Showing posts from November, 2019
Show All

Ealier this year myself and a few other Wi-Fi pros were lucky enough to be asked to provide some input to a new Wi-Fi scanner application being created by Helge Keck . He called the tool "WinFi" and has now released as a free tool for Windows 10. WinFi is a feature-packed application that has many pro-level functions that have quickly made it the Wi-Fi scanner of choice on Windows for many wireless LAN pros. I thought I'd take a few minutes to run through the operation of WinFi and highlight some of my favourite advanced features that you may not have seen yet within the application by creating the video below:   References Application home page Video Link Helge Keck on Twitter
Read more

Using the WLANPi as a wireless serial console

One lesser-known feature we added to the WLANPi image in v1.7 is Wi-Fi console that provides a wireless serial console. As this isn't too widely known, I thought I'd put a video together about it.  The Wi-Fi console feature allows you to hook up a serial cable to the serial port of a piece of nework equipment, then get your WLANPi to broadcast out an SSID you can join from a nearby location. You can then fire up terminal emulation software on your laptop and access the serial port on the nework equipment from a more comfortable location. Note this is a standard part of the WLANPi image since v1.7 - you do not need to install any additional packages, just follow the instructions in this video to flip your WLANPi in to Wi-Fi console mode. References YouTube Video GitHub repo & further information
Read more

I recently created a  video to look at how we understand the data throughput of a wireless client from an over the air Wireshark capture. We take a look at using the I/O Graph feature in Wireshark to achieve this. You can view the video below: References: YouTube video link Metageek Wireshark profile
Read more 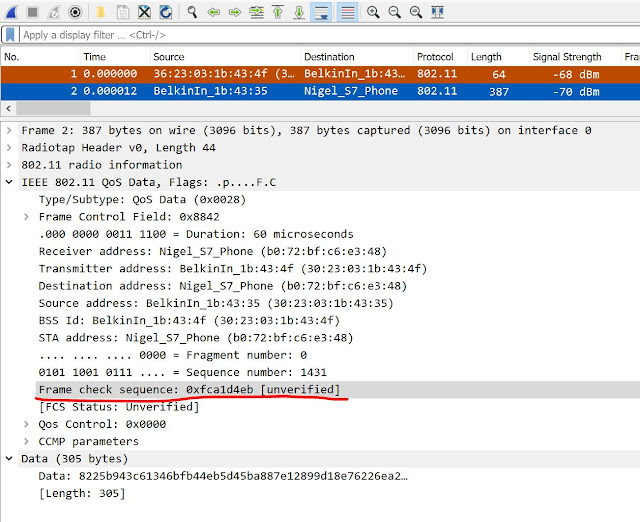 In a recent Wireshark 3.0.6 capture I noticed that FCS values for captured wireless frames were showing as "Unverified". I wasn't sure why this was the case, as I'm sure that Wireshark usually shows a "good" or "bad"  FCS indication. The image below demonstrates what I saw:   After some googling, I found a note that the FCS check was disabled by defaut in Wireshark 3.0.x as some NICs report the FCS check incorrectly.  The following process details how to re-enable the check:  Go to Edit -> Preferences -> Advanced in Wireshark. Enter "wlan.check" in the search bar: Double click on the "False" word for the attribute "wlan.check_checksum". This will toggle it to "True" (make sure you click on the "False" word, not anywhere else on the line).  Hit OK and see the change immediately in your capture decode: Hope this quick note may help someone in the future (...
Read more

Want to be able to capture wireless frames via a WLANPi using just Wireshark on your Windows 10 machine? ...And be able to configure the capture configuration on the WLANPi using just Wireshark too?  Read on... (or checkout the video here ) Earlier this year, I put out a command-line script called WLANPiShark that allowed Windows 10 users to configure a WLANPi and initiate a frame capture stream in to Wireshark. Though a little clunky, it worked quite reliably for most of the time and, judging by feedback I received, was quite popular. As Windows users, we've always been the poor cousins to our Apple brethren who are able to use their Macbook to capture over the air using the internal NIC card of their Mac in monitor mode. Getting a low cost adapter that could be put in to monitor mode on a Windows machine was as rare as hen's teeth. Having access to the WLANPi and being able to fire up WLANPiShark opened up wireless capturing to many folks who have to use Wi
Read more
More posts