Showing posts from August, 2013
Show All

- August 24, 2013
In this article I suggest a nice feature that would provide a useful WiFi vendor differentiation and a valuable tool for administrators of WiFi networks. As a WiFi network value added re-seller (VAR) I visit a lot of customers, interacting mainly with the poor, down-trodden folks who comprise the IT department of an organisation. They are generally responsible for fending off the daily barrage of complaints about " the network" . In general, they are mainly concerned about two factors when it comes to their wireless network: coverage and performance. There are many other factors that they should probably be concerned about, but these are the two factors that tend to keep users off their back if they are both taken care of. Verifying WiFi coverage for an average IT administrator is generally very simple. They simply do a Google search download a tool such as Metageek's inSSIDe r and visit the area where users are complaining. Even if they don't manage to use
Read more 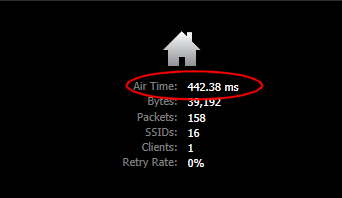 It’s a well known rule of thumb when designing WiFi networks that you need to try to keep the number of SSIDs broadcast by your wireless network  down to a ‘reasonable’ number. In this article, I take a look at how much of an issue SSIDs (and their beacons) are in consuming valuable wireless air-time. Generally, it’s recommended to keep the number of SSIDs below around 5 (ish). The reason for keeping the number of SSIDs to a minimum is that each SSID is advertised using a type of management frame called a ‘beacon’.  Beacons are generally sent 10 times per second for each SSID on the wireless network. Therefore, if you have 10 SSIDs, they will each be advertised 10 times per second, giving us 100 beacons per second. Air-time is a finite resource – there is only so much data that can be transferred across the air over a period of one second. If a large chunk of air-time is being consumed by SSID beacons, then that doesn’t leave a whole lot of time remaining for actual user d
Read more