Showing posts from May, 2014
Show All

- May 15, 2014
After previously looking at the challenges we may face with 802.11ac due to the restrictions of the 5GHz band (see part 1 and part 2 of this series), in this final installment, I suggest how we may mitigate the challenges we may face, together with a possible (but no doubt controversial) solution. The Solution? I'm not aware of any "magic bullet" to solve all of the challenges outlined in this series of articles (sorry). More spectrum will certainly help things. But, time-scales for the allocation and adoption of new spectrum are not clear at this point in time, though many agencies around the world are considering ways to free up more spectrum to improve WiFi capacity. Though spectrum may become available in relatively short time-frames, there will still, no doubt, be a significant time-lag before this permeates through in to the world of vendor and consumer WiFi products (remember the issues raised around UNII-2e support?)  The best way to mitigate th
Read more

In part one of this series looking at 802.11ac challenges, we looked at the issues that the use of the 5GHz band brings, particularly around DFS. In this second installment, we look at further challenges to designing and deploying 802.11ac networks. Extended Channel (UNII-2e) Device Support Although we may be located well away from any obvious sources of radar interference, there may be other obstacles to the 5GHz nirvana outlined in the 802.11ac marketing briefs. One ugly fact affecting WiFi networks on the 5GHz band is that not all devices that use the 5GHz band support all of the unlicensed channels available in our region.  For instance, I recently purchased a Nexus 7 tablet and was extremely disappointed to find that it only supports channels 36 to 64 (for the UK). The remaining available channels, 100 - 140 are not supported at all. I think that this variation in support for channels was originally rooted in a lack of support for devices in the UNII-2e channels (c
Read more

- May 13, 2014
The WiFi industry has been buzzing with excitement around the recently ratified 802.11ac standard. The promise of higher speeds, lower battery usage for mobile devices and the enforced move to the higher-capacity 5GHz band is enough to put a smile on the face of even the most curmudgeonly members of the WiFi fraternity. I've been giving some serious thought recently to what the best approaches might be in terms of designing and deploying 802.11ac networks. There are obviously challenges as we move through the transition from legacy standards to the shiny new 802.11ac standard:  new cabling requirements for higher uplink speeds to 802.11ac APs Increased power requirements for our 802.11ac APs accommodating the mix of new and legacy clients figuring out exactly how we plan our channels for the brave new world of 802.11ac The 802.11ac standard mandates that access points and clients using the new standard will only be supported on the 5GHz band, which is great news
Read more

Performing A WiFi Survey For A Building That Doesn't Exist (Yet) 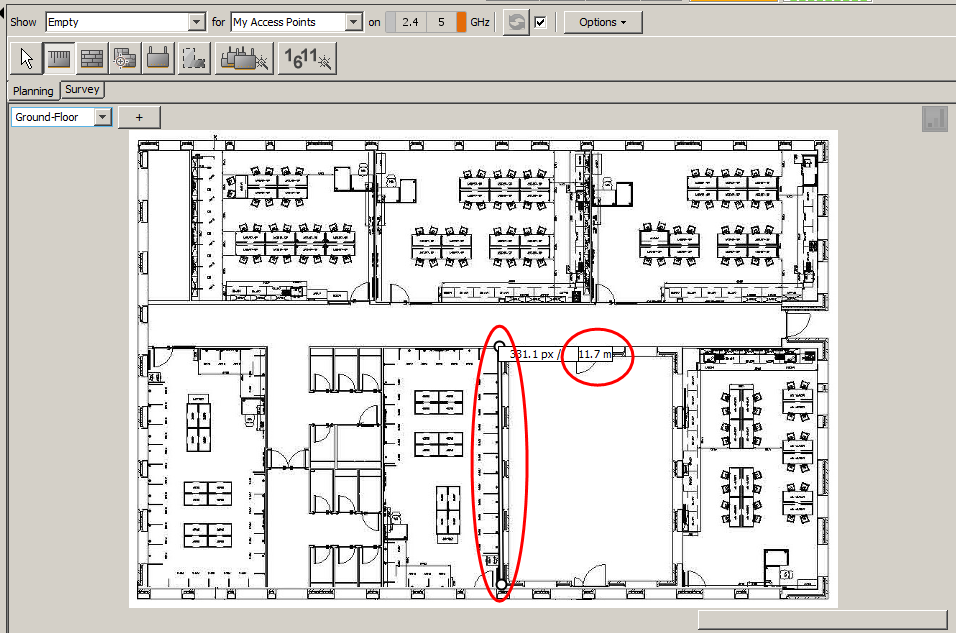 I was recently involved in some work for an organization that had a newly constructed building to expand their, already sizable, campus. The building was a new, state-of-the-art facility that would require ubiquitous WiFi network coverage for a range of devices, including wireless voice handsets. Like many organisations, they were faced with the challenge of specifying the wireless equipment that they would require long before the building had even started construction. In order to secure the funding they would need for the new wireless infrastructure components (i.e. APs, wireless controllers, licensing), they had to try to anticipate what the new wireless network would look like, taking account of the services that they would require. The organisation realised that they would require a few more access points than might be usually expected for basic data services over wireless, but had taken a best guess at how many APs they might require and where they might go. When we walk
Read more

Plans for new spectrum allocation for WiFi networks in North America are regular fodder for many blog and news articles that I  see scrolling past in the many RSS feeds that I monitor for WiFi related news. However, information about plans for additional spectrum allocation within the UK isn't quite so widely covered (in fact, I'd go so far as to say that it is largely ignored). But, here in the UK we still face the same issues as many other areas of the world: an explosion in mobile devices, massive deployment of WiFi networks in homes and businesses, and an ongoing increase in bandwidth demands. WiFi in the UK operates on both the 2.4GHz and 5GHz bands. We have 13 channels allocated for WiFi on 2.4GHz, but for practical purposes, only 3 may be used across a wireless LAN. On the 5GHz band, we have 19 channels allocated to WiFi, but are generally limited to using only 16 of those channels due to restrictions in supporting 3 channels that may interfere with weather rada
Read more
More posts