- August 16, 2013
It’s a well known rule of thumb when designing WiFi networks that you need to try to keep the number of SSIDs broadcast by your wireless network  down to a ‘reasonable’ number. In this article, I take a look at how much of an issue SSIDs (and their beacons) are in consuming valuable wireless air-time.

Generally, it’s recommended to keep the number of SSIDs below around 5 (ish).

Air-time is a finite resource – there is only so much data that can be transferred across the air over a period of one second. If a large chunk of air-time is being consumed by SSID beacons, then that doesn’t leave a whole lot of time remaining for actual user data to travel over the air (which is the whole point of having a wireless network!).

I have previously heard statements from various wireless engineers along the lines of up to 50% of available air-time being consumed by beacons once you have 6 or 7 SSIDs being broadcast by a network. I’ve taken this information on face-value and never really thought too much about it.

However, this evening I found myself in a hotel room with some time on my hands, a Cisco WLC, a Cisco AP and a copy of Metageek Eye PA. I thought it was time to test the ‘conventional wisdom’.

My approach was simple: I would set up my AP on channel 11 (2.4GHz) and capture all frames using Eye PA. I would vary the number of SSIDs being broadcast and monitor the results.

To determine how much actual air-time is being consumed by beacons, I would use Eye PA’s filtering capabilities to remove all frames except beacon frames, and remove any other local interfering SSID traffic (i.e. the pesky hotel WiFi on the same channel!). This would leave me with just the beacon frames from my AP:


Eye PA allows you to select a period of one second of the filtered traffic that you have captured, and also shows the amount of air-time those frames consumed in that period: 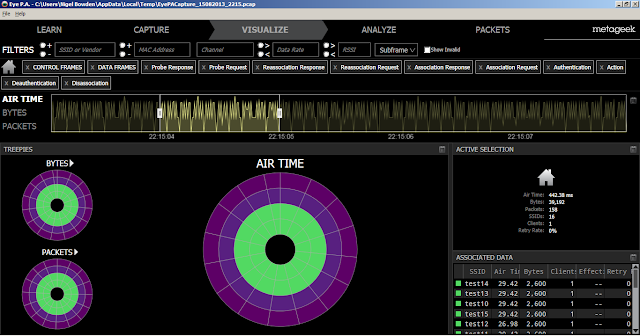 I just then applied some simple maths to work out how much time the beacons frames consumed over a period of one second.
I then tabulated the results:

The results show pretty much what I expected, but I was surprised by how little time the beacons consumed, particularly once the lowest mandatory speed is ramped up to 54Mbps. They certainly don’t support the information that had been imparted to me regarding 7 SSIDs consuming 50% of all air-time.

You can clearly see the effect of adding more SSIDs (and consequently more beacons). As more SSIDs are added, more air-time is devoted to beacon traffic. This is a bad thing, if it becomes a significant chunk of your air-time.

You can also clearly see the effect of increasing the lowest mandatory speed supported by the wireless network. Once you increase it to 54Mbps, even with 15 SSIDs, you are only consuming 2% of the available air-space.

I suspect that the conventional wisdom of keeping your SSID numbers down to below 5 is founded on the assumption that many wireless networks are going to be installed using default settings. Often, default settings will configure the lowest mandatory speed to one of the lower 802.11b speeds, which could then make significant numbers of SSIDs an issue.

For me there are several lessons to take away:

I’d welcome any feedback on my testing. If there are any flaws in my logic or testing or there are other considerations I may have missed, then please feel free to drop me a note or comment.
Beacons EyePA SSID