- January 19, 2014
Often when looking through a wireless capture file, there may be a number of frames which have been corrupted, but Wireshark has attempted to decode it as best it can.

When a frame is corrupted, the frame check sequence of the frame will fail, indicating that some part (or parts) of the frame have errored during transit.

When reviewing a trace, it can be very easy to miss the fact that the FCS is wrong and that you are essentially looking at a corrupt frame. This will often manifest itself bizarre frame types and field values which can lead you completely astray in your diagnosis efforts.

There are a couple of ways to get around this.

Firstly, you can add a display filter to remove all of the frames with a bad FCS (wlan.fcs_bad == 1), but use this option with care (see note below):

The drawback to this approach is that just because some frames fail the FCS, the actual frame that arrived at the destination station may have been OK. It depends on where your analyser is physically compared to the target stations and what local RF factors may impact its wireless reception (e.g. local interference).

Secondly, you can add a colouration rule to indicate which frame  have a bad FCS and should be ignored (View > Coloring Rules) :

This approach is slightly more useful, as even if your analyser detects a frame as having a bad FCS, you can still the frame which may have been received uncorrupted by the target station.

I've chosen to use a bright-red colouration, but you can choose any colours you feel appropriate. In the screenshot below, you can see at at glance the frames which are corrupt(i.e. have a bad FCS): 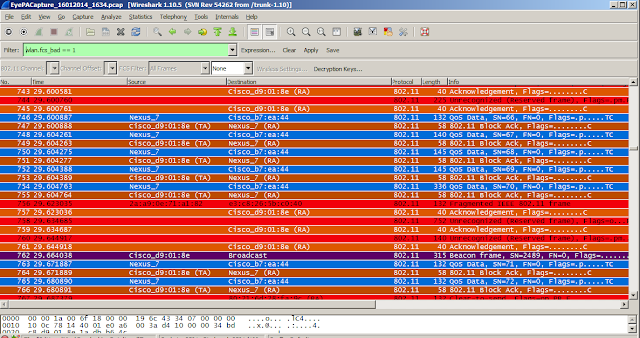 Both of these approaches have their uses, but be mindful of the caveats I have included in the descriptions above.