When a wireless LAN client needs to find a nearby access point to join a Wi-Fi network, it has two choices:

One (unfortunate) side-effect of active scanning is that a client advertises its presence to anyone listening for probe requests in the vicinity. Even if the client is unsuccessful in finding and joining a network, it advertises its presence by continually probing for networks that it has been configured to join. The MAC address of the probing client’s wireless NIC is present, in the clear, in every probe request.

The availability of the client MAC address, which is unique to that client, presents some potential privacy issues. Organisations that have wireless networks in multiple locations could, in theory, track the location of the client as it moves between sites. When coupled with other data sources (e.g. a login to a guest wireless portal for instance), it could allow tracking of an individual and gathering of behavioural data.

In order to combat these privacy concerns, some client vendors have taken the decision to randomise the MAC addresses that are used when probing for networks. This ensures that a client cannot easily be tracked as it moves between locations. Clients may use a randomised address to discover networks, but then revert to their “real” MAC address once they choose to join a network.

Although I’ve read about this behaviour, I’d never observed it first-hand. However, I recently spotted it, by accident, while testing some wireless tools. The tool that I was looking at was the ‘airodump-ng’ tool, which is part of the ‘Aircrack’ toolset. Aircrack is a suite of Linux-based pen-testing tools.

Airodump-ng is a wireless scanner that reports wireless networks, detected via beacons, from nearby access points. It also reports clients that can be heard probing in the vicinity. A screen-shot of the tool is shown below -  the top of the display shows the detected networks (discovered via beacons), the lower part of the display shows the clients (also know as stations) that can be heard probing.

Airodump-ng is generally used to scan across multiple channels to gather network and client data. However, it may also be configured to scan on a single channel of interest.

During my testing, I configured to my airodump-ng machine to scan on channel 52, as I knew there was an AP nearby using that channel. However, I noticed that in addition to the network I expected to see, I saw a client probing for a network called “Hidden _SSID”. This is a non-existent network that I had configured on my nearby MacBook Pro while doing some testing earlier in the day. I noticed, however, that the MAC address of the probing client was different to the actual MAC address of my MBP.

I disabled and re-enabled my MBP wireless adapter several times. Each time I did this, a new MAC address appeared in the airodump-ng client list as the MBP probed with a new, randomised, MAC address. This is Apple MAC address randomization in action. You can see the effect in the screen-shot below:

This is an interesting demonstration of the randomised client behaviour employed by Apple devices (among others). I thought this post might be useful for others who have not observed this feature, or perhaps aren’t aware that some clients exhibit this behaviour.

I tried looking up some of the OUIs used in the randomized addresses using the online Wireshark OUI checker, but none of them corresponded with known manufacturer OUIs. The MAC addresses observed didn’t seem to be derived in any obvious way from the true MAC address of the MBP, they appear to be completely randomised.

I received a Tweet from Arsen Bandurian about the randomized MAC addresses used by the Apple devices: 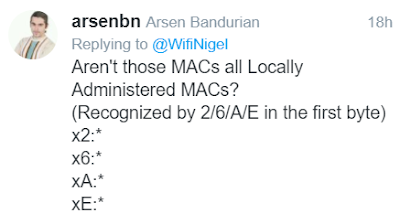 (If you got to the end of this article without falling to sleep, you did jolly well...)
MAC Probe Randomization