Designing WLAN's is a pretty tricky business at the best of times, but trying to design a WLAN that works well for all clients is hard as they vary so wildly in terms of form-factor, wireless chip-sets, antenna counts and a plethora of other factors that mean they all see the wireless world in their own annoyingly unique way.

The upshot of this is that when designing a WLAN we have to spend time trying to figure out how well (or badly) each client-type we need to support in our design sees our proposed wireless network. In simple terms, some will "hear" it more clearly than others due to their better antennas, build and sensitivity. A wise man once said that we should design our networks for our "most important, least capable" devices (...don't let him hug you, he WILL squish you). Once we've figured this device out, we have to work out the offset between our client of choice and our survey equipment or RF modelling software.

To get this "offset" to attempt to account for the signal level difference between our  client and preferred design method/tool, we usually take a few comparative signal measurements. This allows us to apply an offset, in dB, to our survey/design report so that coverage heat-maps will be more representative of how the world will look to our important client.

The snag is that, as Keith Parsons and others have noted, even the same model of client can vary due to manufacturing tolerances when you test their reported signal levels under the same conditions. For example, if you get hold of ten Samsung S10's and test them all in the same way, the tolerances of their internal RF components mean that the signal level results can vary by a few dB.

As you can see, getting this offset figure is not an exact science.


A colleague recently challenged me to undertake an exercise to  look at how wireless clients see the world based on yet another aspect I hadn't really considered too deeply before: its spatial orientation and position. I was aware that things would vary a little depending on how the device was oriented in terms of vertical of horizontal positioning, but had not really looked in to it in any real depth.

The exercise (which I've termed the "Six Inch Square Challenge" as people love a meme) investigates how the RSSI level reported by a client will vary with small positional and rotational changes (hint: it may be more surprising than you expect).

It starts by taking a 6 inch square of paper and fixing it to a surface (e.g. a table top). A test AP is then set up at some distance (I'd recommend at least 5 metres away) in line of sight of the paper square location. A wireless client is then placed on one corner of the square and the test AP RSSI measured using a wireless app on the client. The client is then rotated through 360 degrees in 45 degree increments, with the RSSI at each point being recorded. It's best to allow a reasonable period (e.g. 30 secs) for the RSSI reading to settle at each point.

Once one corner of the square is completed for the 360 degree rotation, the client is moved to the other 3 corners of the square in turn and the whole measuring process repeated.

The entire measuring exercise is repeated 3 times to verify that consistency of measurements is being achieved. The picture below shows the rudimentary setup I used (a spice rack turntable and a butchered cardboard box with some packing tape). I designated the four corners of the paper square as north-west, north-east, south-west and south-east for obvious reasons. 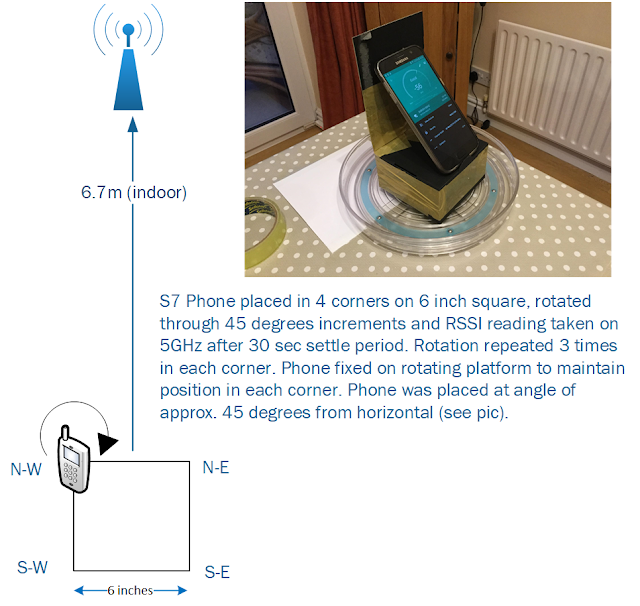 My test client was a Samsung S7 running the Ubiquiti WiFiman app (as it just happened to be on my phone). As you can see in the picture, the phone is angled at around 45 degrees from horizontal.

At each test point, I found that the app needed around 30 seconds before it would settle on a relatively consistent RSSI level (give or take one dB). I found that it was best to keep at least 3 feet away from the client to avoid some variations that my proximity seemed to cause at times.

The results of the tests are show below (and available for download from here): 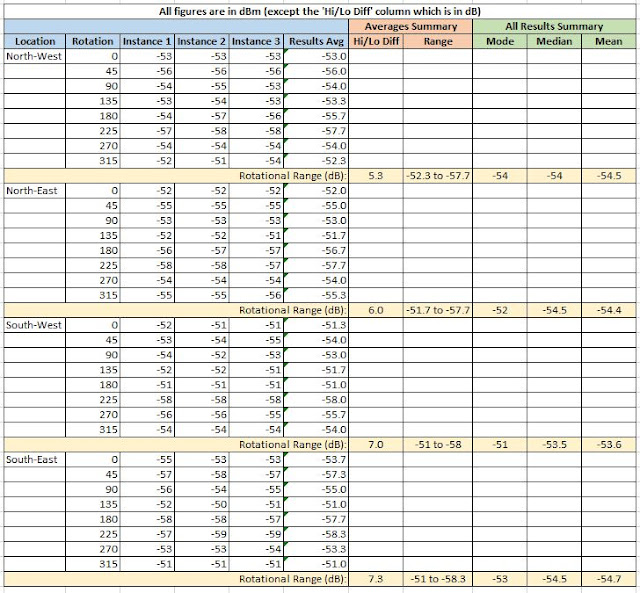 At first glance, it's just a whole pile of numbers swimming before your eyes. But, once you zoom in on a few specific areas, there are some interesting details in there:

If you dig through the figures, I'm sure you can find your own insights.

I also repeated the same test run with the phone in a horizontal position and received a completely different set of results: 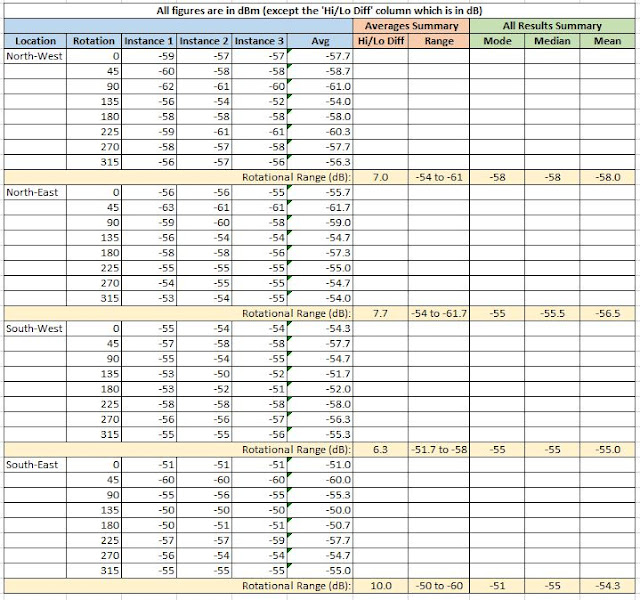 I'm sure you can take a look for yourself and pick out some interesting nuggets. It was quite an eye-opener for me (e.g. 10dB variation in the south-east position!)

As with everything else in Wi-Fi, getting hard and fast rules to apply when grappling with the data shown by these tests are challenging.

For me, the key takeaway is to be more aware of the possible variations and causes of those variations I might incur by even small changes in measuring technique when trying to determine survey/design offsets. Repetition of measurements would seem prudent to ensure you haven't hit a particular location or orientation that has a particularly unusual RSSI reading and is not "typical" - even just a few inches or varying the orientation by a few degrees may vary things.

It could be argued that perhaps you should use the lowest achieved RSSI measurements to cater for the worst case scenario, but this can turn in to a downward spiral of "what-ifs" when you start to consider things like hands around handsets, bodies between the phone and AP...the list goes on.

The best you can do with this information is to be aware that small positional variations can really skew things if you're not aware of them. I'd advise being sensible and pragmatic, and make sure a few consistent readings can be achieved in your measurement location when trying to determine an useful offset.


Popular posts from this blog