- November 12, 2014
There's a well known rule of thumb when planning wireless LAN networks which states that for every 6dB increase in AP transmit power, the coverage distance of the AP doubles, This is obviously assuming there are no obstacles to limit or reduce coverage - it assumes a clear path and considers the effect of Free Space Path Loss (FSPL). Nonetheless, it is a useful rule of thumb for planning. Although doubling coverage with 6dB is useful, I thought it might be interesting to look at the effect of increasing power by other increments too, to see the (theoretical) effect on coverage.

Quite a few articles, web pages and wireless LAN text books quote the following rule of thumb when considering the effect of increasing the transmit power of an access point.


Here is an example of such an article: http://www.cisco.com/c/en/us/support/docs/wireless-mobility/wireless-lan-wlan/23231-powervalues-23231.html

Whilst it is quite useful to remember when increasing or decreasing AP power settings, I always wonder what the effect would be of adjusting the transmit power by perhaps 3dB - would this increase the coverage distance by only half the distance that 6dB gives us? Given the logarithmic nature of dB measurements, my gut instinct has always been that things are probably not quite that intuitive.

The easiest way to test for the coverage increase provided by an increase in transmit power is to use our old friend the Free Space Path Loss formula. By plugging in a few values, we should be able to observe the effect of cell radius distance as we increase the transmit value that we are considering.

The cornerstone of our coverage calculations will be the Free Space Path Loss formula. The energy available from an RF transmission source decreases in a predictable manner as you move away from that source. It is analogous to observing a carbon filament lamp hanging from a ceiling: the level of light that you observe decreases as you move away from it. By using the FSPL formula we can predict what the level of RF energy should be as we move away from an RF source (a wireless access point in our case).

When looking at these calculations, you need to understand that the calculation is based on the loss in "free space". This asumes that RF energy is passing through space with no obstructions that might degrade, block, reflect or otherwise change or disrupt with the signal. If you take the example of an access point in a indoors environment, RF signals will be subject to a whole range of obstructions (walls, doors, windows, people, furniture) which will generally have a negative effect on RF signals.Therefore, the calculations shown in the examples presented below are not "real world" in many instances, but give an indication of how power changes affect RF coverage

For our purposes, we need to understand the distance at which a particular signal level might be heard. The variables we have in the FSPL formula are frequency and distance. These are used to derive the loss (in dB) over the distance specified (in metres) at a given frequency (in hertz). Here is the forumla:

This isn't the correct format for our requirements. What we need to understand is the distance over which a particular loss occurs for a given frequency. Therefore, we need to re-arrange the formula to make distance the subject of the formula:

Now that we have the FSPL formula in a useful format, we need to decide how we are going to test the '6dB increase' rule of thumb and look at other loss values. The easiest way to do this is to assume we have an AP that is set to a number of transmit values and test what the distance for a particular cell edge value.

For instance, a general useful cell edge is a value of -67dBm which is often used as the cell edge for voice-grade wireless networks. If we assume a range of tx power values for an access point, we know what the loss will be (in dB to our cell edge) - for example, if our AP is set to a tx power of 1dBm and we are using a cell edge of -67dBm, we know that our expected loss is 68dB (calc: 1dBm - (-67dBm) = 68dB). We can calculate the distance required to incur that loss and check the distance to our nominated cell edge. By varying the tx power of the theoretical AP, we can see how the distance to the edge of the cell varies.

The diagram below demonstrates the approach: 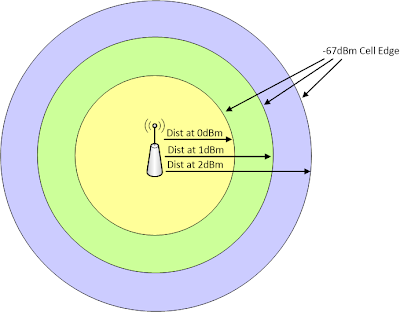 
The tables below show the application of the approach outlined above. They look at the distance to a -67dBm cell edge for a range of transmit powers from an initial value of 0dBm in 1dB increments up to 20dBm. As the power increases, we can see that the distance to the cell edge increases (as we would expect). The increase at each point is also expressed as a percentage increase, together with a proportional increase over the original 0dBm (1mW) power level. Interestingly, the figures produced verify the rule of thumb that states that a 6dB increase doubles the distance (highlighted in blue in the tables for both 2.4GHz and 5GHz below):


(Note: you can have a look at these sheets here: http://bit.ly/WiFiNigel-CellSizes)


The figures above speak for themselves. They confirm that 6dB increments increase the distance to the cell edge by 100% (i.e. double it).

It's interesting to consider that each 3dB increment is (in real terms) a doubling of power. Therefore a 6dB (3dB + 3dB) increase is actually a quadrupling of power. To double the distance to the same cell-edge power level, transmit power has to increased by a factor of 4.

What is interesting is that no matter what start value that is inserted in to the table (for any frequency), the distance increase (expressed as a percentage/proportion of the original distance) remains the same. This can be seen by comparing the 2.4GHz and 5GHz tables above - both have the same percentage increases despite being different frequency bands.

Finally, please remember the values all apply in a free space environment, not one that includes lots of obstructions. They are only theoretical values which don't often apply in the real world, but are still very useful to consider.

OK, that's about as much RF math as I can stand - I'm off to have a migraine. Hope it's been useful.

(Note: the measurements expressed are from the AP to a cell edge (i.e. cell radius), not the coverage area of the cell. I'll leave you to work out the effect on the cell area, which is a whole new world of pain encompassing squared radius values...)